The Brave Women in the New Cambodian Artists 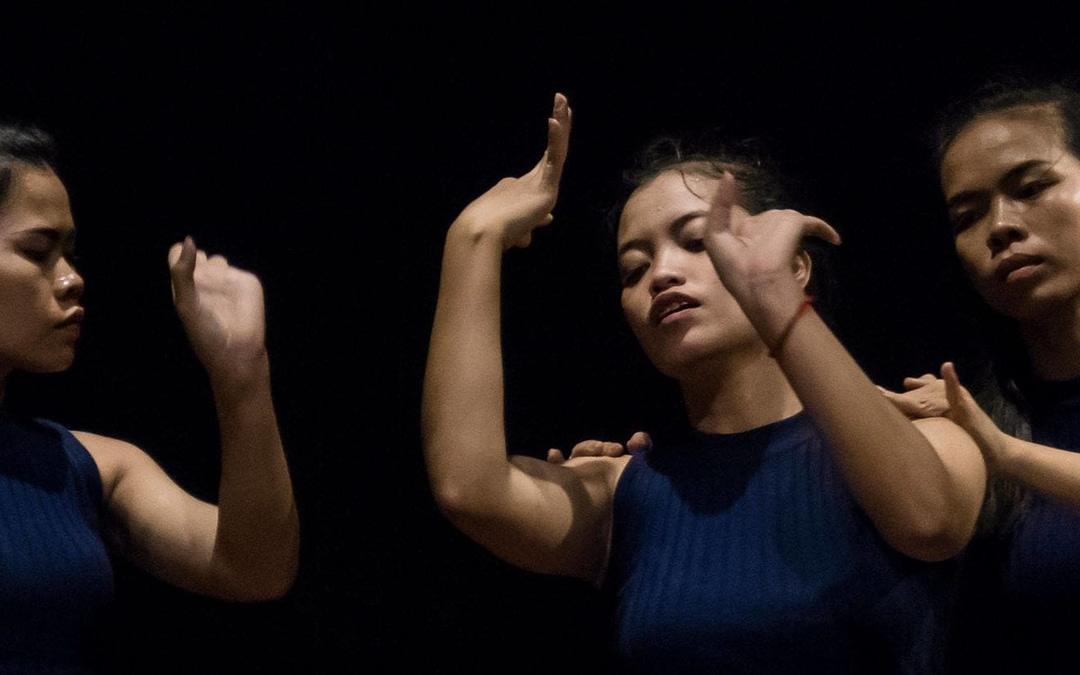 We sat in front row seats in the black box theater to experience the recent work of the New Cambodian Artists on Saturday night. It was intense, immediate, personal, moving, skillful, and entrancing. You leave recognizing that you have experienced the ground-breaking actions of young women who will forever alter the future of their culture.

The three young women dancers were introduced by Bob Ruijzendaal, the company’s Dutch artistic director, who also illuminated the role of Sreyneang Khon, the company’s manager and multi-faceted caretaker of the enterprise. Introducing modern dance has never been easy in any country’s history but in Cambodia, still struggling to revive traditional arts destroyed by the Khmer Rouge, it is a courageous task. The absence of a strong cultural infrastructure and the expectations of women’s roles makes it difficult for this powerfully skilled female company to exist. Yet they do exist, grow and sustain themselves by pure courage, dedication and a gallant audacity that demands admiration.

Well versed in the rich Apsara tradition they deepen it with contemporary improvisation, choreography, music and a willingness to authentically parlay their personhoods to cultivate growth and understanding of contemporary Khmer affirmation.

For many Western people, modern dance is synonymous with the work of Martha Graham. Known for her theatricality, severity, solemnity, and emotionally charged dances, Graham was a true original. The mythic content of her work was introspective in its involvement with human emotions and the personal exploration of deep-seated motivations. Graham believed that the purpose of dance is to illuminate the life and struggles of the human experience, paying particular attention to humans’ inner nature. Her dances were dramatic expressions of the conflict between the individual and society in an attempt to look at the internal motivations of humanity. Graham believed that using dance for that purpose would bring psychoemotional enlightenment. In 1938, Graham wrote that “Art is the evocation of man’s inner nature. Through art, we find man’s unconscious – race memory – is the history and psyche of the race brought into focus”

Early pioneers like Martha Graham, Isadora Duncan, Mary Wigman, Marie Chouinard, Maud Allan, Loie Fuller, and many others can be felt standing behind NCA and their disciplined efforts. Yet, Saturday night a German Foundation, Heinrich Böll Stiftung Cambodia, announced publicly its support for NCA with a grant that will allow them to continue their education, travel, and tutelage without the constant stress of striving for simple survival. The applause was heartfelt.

It is the audience task to spread the word of their work and to bring the local community into their fold.