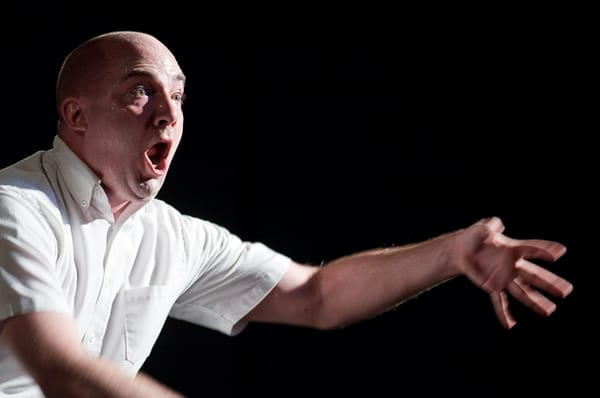 Our May, 2015 performance series All Nets Have Holes will include a piece written by Clay McLeod Chapman, who has generously given me the performance rights to his stories in rest area.  If you can get to Estes Park, Colorado for the Stanley Film Fest you will have the rare opportunity to see Chapman perform and also see his new film The Boy. Chapman’s writing is brave, aching, heartfelt and haunting.  Booklist calls it “Crisp, vivid prose strongly reminiscent of the hard-life, hard-luck stories of Raymond Chandler.”  Every work I have read of his has never left the back of my mind – and I can’t wait to see him perform.

“Like a collection of David Sedaris short stories, these are imaginative, slightly surreal tales that will stay with you for years. ”
– Canadian Broadcasting Center 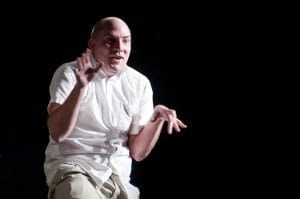 Please get tickets for The Pumpkin Pie Show, May 3rd at the Stanley Film Fest.  Stories written by Clay McLeod Chapman. Performed by Chapman and Hanna Cheek.

Celebrating its second decade of performances, the Pumpkin Pie Show is a literary fist in the face. Part storytelling session, part boxing match, part shamanistic ritual, the Pumpkin Pie Show has established itself as an all-points artistic hodgepodge of theatre and literature. We pick and choose the essentials of both mediums, channeling their rocking properties in order to create a more intimate relationship between performer and audience. We want to see the whites of our audience’s eyes. Certain basic rules that we’ve set up for all our shows are: No sets. No costumes. No nothing beyond the text and the performance itself. Our goal is to strip away those elements that we find extraneous to the tale being told, conjuring up an atmosphere of “creating something out of nothing,” as well as focusing on that ethereal connective tissue between the one telling the story and our audience. Packed with enough emotional intensity to feel like a rock concert rather than just spinning a yarn, the Pumpkin Pie Show is pure bedtime stories for adults.

The Boy is an intimate portrait of a 9-year-old sociopath as he first discovers his taste for killing. Set in an ailing motel on a desolate stretch of Southern highway, The Boy celebrates the dark imagination of children left to their own devices and the urge to… experiment.

The Boy is the first film in a trilogy aimed at tracking the childhood of a future serial killer, with installments depicting the character at ages 9, 14 and 18, respectively, and ending with his full transformation to an iconic mass murderer.

The Boy is produced by SpectreVision (Principles: Elijah Wood, Daniel Noah and Josh Waller) and Chiller Films. The Boy is a feature transfer of the 2012 Sundance short film “Henley” written by Chapman and director Craig Macneill, based on the chapter “The Henley Road Motel” from the novel “Miss Corpus” by Chapman.

Chapman has written powerful stories and books for all ages.  Please peruse his work here.