We must overcome the notion that we must be regular… it robs you of the chance to be extraordinary and leads you to the mediocre.”
– Uta Hagen, Legendary Actress and Teacher

Jinx Davis is an artist who has taken Ms. Hagen’s advice to heart and has created a body of work that crosses boundaries, unites people of differences, honors craft and pricks the heart.  She reminds us of the true function of theater and awakens us on the deepest levels.

Her form of theatre is intimate and immediate, following the style of the great solo performer, Ruth Draper (1884-1956). Drapers work inspired the toughest solo work of our time, including that of Whoopi Goldberg, Lily Tomlin’s “Search for Intelligent Life” and Sarah Jones’ “Bridge and Tunnel.”

A pioneer in 20th century drama, Ruth Draper was described as “the greatest individual performer that America has ever given us.” Her uncanny ability, while alone on stage, to shift between many characters and engage intimately with invisible people brought awe to actors, royalty and throngs of crowds for decades.

Davis’s work is notably simple: Bare stage, mostly neutral attire.  She frequently breaks the 4th wall separating actor from the audience and invites the audience to co-create with her.

Jinx Davis acts with invisible people.  She acts with a phone and nothing else.  Or she acts with her whole world, by imaginatively reaching out and pulling in her life’s experiences and her patrons, in one swoop.

It’s a mode of theater that can be as focused and personal as it is expansive and inclusive.  It can be highly stylized and gut-wrenchingly gritty. –  Kevin Lynch, The Capital Times 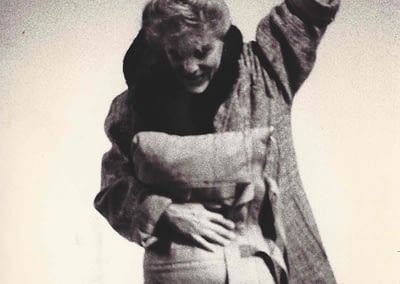 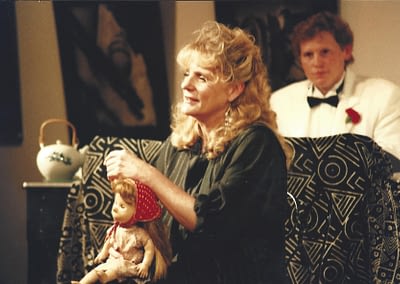