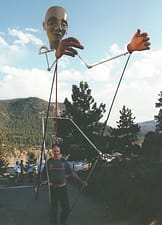 They’re true musical beings in music and motion…and I think that’s what the puppets are all about. – Jinx Davis of Peace Pilgrims 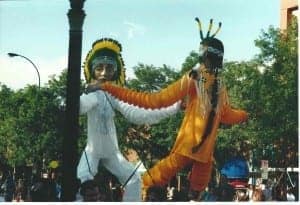 Longmont CO- It may have been the smallest parade the city has ever seen, but it was hard to miss.

Helping to kick off the Artwalk and streetscape celebration Friday evening were two giant puppts followed by Big Ropuge, a Mardi Gras band.

The puppets, 23-foot-tall Native Americans, were from Peace Pilgrims of Estes Park.  Making their Longmont debut, the puppets drew a lot of attention.

“I wish the were real Indians,’ added Katrina Dunne.

The giant puppets were designed for Trinidad’s colorful Carnival celebration.

“People want to be surprised,’ said Jinx Davis.  “Surpirse is a healthy, wonderful thing.”  She said the company has three of the puppets, though only two came to Longmont.  She said the Native Americans were chosen by the makers in Trinidad and are not meant to be stereotypical, but in honor of a noble people and in celebration of nature and life.

She said the puppets are actually kinetic sculptures.  They’re operated by puppeteers dressed in black and using their whole bodies to control the massive movements of the colorful characters.

The two puppets downtown were opereated by theatre member Andy Pizer and college studend Mario Sands of Texas.  Davis said the puppets are made of fiberglass and Chinese silk.  Each one weighs about 30 pounds.

“It’s not so much the weight, it’s getting them controlled that ‘s challenging.  She said the puppets need a steady beat and a good rhythm to help stay in motion.

“They’re true musical beings in music and motion…and I thingk that’s what the puppets are all about,” Davis said.

Dancing along Main Street, crowds were mezmorized by the massive marionettes.

“They’re really neat,” said Joan Solem of Longmost, who ws with hier young son, Jackson Solem.  “They look like something from that festival in New Mexico.”