Heal, heal, the gang’s all here

Back in the 1920’s, nobody knew how to slay ’em in the spirit like Aimee Semple McPherson.  Part faith healer, part flashy entertainer, the charismatic McPerson was evangelism’s answer to Hollywood, decades before the likes of Jerry Falwell and Jim Bakker hit the scene.

Drop in for a performance and you’re in for a genuine tambourine-shaking, holy-rolling revival-metting experience, complete with a miracle healing or tow.  With reed man Hanah Jon Taylor and keyboartdist Merrit L. Mapp handling the chores as the revival bank, the only thing missing is the makeshift tent.

As the title character, Davis takes an interesting approach.  Usually, this sort of sing-person drama makes its points by giving the audience a peek inside the head of its subject.  Considering the high drama of Semple McPherson’s life (apparently, she once claimed she’d been kidnapped in order to pursue a romantic affair), you’d expect a conventional approach.  But Davis isn’t interested in a psychoanalysis of Semple McPherson–she’d rather get inside the heads of her audience.  More concerned with the message than the medium, Davis serves up the evangelist in all her sermonizing, Pentecostal glory – but what she’s really serving up is fundamentalism, and asking her audience to react.

It’s risky move, but one that ends up paying big dividends.  Davis, who spent hours listening to tapes of Semple McPherson’s actual sermons, has thrown herself into the role, and in large part it’s her energy that makes the experience credible.  Her charismatic stylings bring an audience, clearly more used to the standard passive theater experience, smack into the main dilemma of fundamentalism:  Do you give in to the raw energy and sense of communithy, or do you remain suspicious and aloof, refusing to suspend disbelief?

It’s not an easy question to answer while you sing along with the hymns, shake your tambourine and watch the crutches fly as another lucky sould is saved in the faith–but then again, that’s the point.  Much as Semple McPherson probably did, Davis seemed to have some friendly faces in her opening-night audience to help set the mood with a well-times ‘amen, sister,’ but she was still able to convince several unsuspecting audinece member to become beneficiaries of her ‘healing powers’.

In her pre-performance monlogue, Davis reveals that she and her theater have themselves come under attack by local fundamentalists, an experience that led her to explore the appeal of a religious movement that’s attracting more followers than ever.  If nothing else, she’s certainly done an admirable job of raising questions.  By the end of the evening, there’s spirit to spare in the Mode Theatre; whether or not it’s the holy variety is up to you do decide. 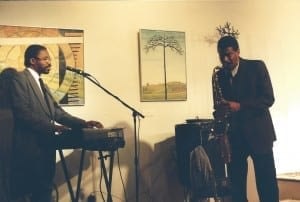