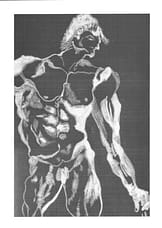 The Mode Theatre, In Waterloo Wisconsin, is changing its face again.  This time it celebrates and explores the nude male body in a benefit for AIDS.  For the next month, the performance space and residential gallery will be home to Gordon Morey’s exhibit “The Male Reflection and One Woman.”  The exhibit features more than 100 oil, pastel, and sculpture pieces.

More than 3,000 people are expected to attend the “AIDS Benefit Extravaganza,” and exhibit opening. Admission is free, but donations will be accepter for the Rodney Scheel House, a proposed group house for people with AIDS.  The Rodney Scheel House, which breaks ground this month, will be built on Madison’s east side and is slated for the spring, 1995 opening.  The home will be named after a local restaurant/nightclub owner who renovated the Washington Hotel on West Washington Avenue and died of AIDS-related illnesses in July 1990.

Morey’s images celebrates nature and life with humor and outlandishness, but the messages run deeper, exploring the daily challenges of people who must work and live with AIDS.  Complementing Morey’s exhibit will be Jinx Davis and Company’s high-energy and hilarious performance of “Ms. Biffy O’Shay Meets the Men.”  Davis, an actress whose one woman weekend shows have been drawing fans from as far away as Chicago and Minneapolis, bought the 1937 moviehouse with her partner, Andy Pizer and remodeled the building to meet the needs of visiting artist like Morey.

← Davis Resurrects The Mode From Rome to Wisconsin →
Skills Posted on