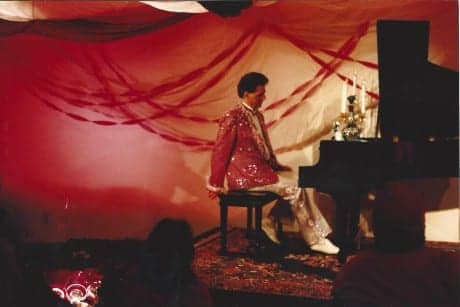 A tribute to Randy Anderson, who even in death still entertains us.  His work with the Living Arts Corporation still shines gloriously in our minds.

Wisconsin was Liberace’s home and the winter holidays were his favorite season. To celebrate the outrageous phenomenon created by the Word’s Finest Showman we bring Liberace home, both as a highly entertaining performer and as a real and reflecting man. Our Liberace will entrall you with the unique music, extravagant costumes, glittering rhinestones, The Dancing Waters, and of course , his infamous candelabrum.

Once captivated by the glamorous fantasy of the flamboyant idol and singing along with his popular piano renditions, we take you behind the illusion and into the complex and lonely world of the shy Wladziu Valentino Liberace. An evening of high energy and joyful flamboyance rooted in a child’s wonderment of a world wherin Lee Lierce exerted enormous enegies to hide himslef.

Randy Anderson lieterally becomes Liberace. Whether you adored or detested this musical monumnet and trailbazer- whether kitsch is your aesthetic of choice of simply a fun experience to witness- whether or not you understood the cultural implications of his staggering popularity, Liberace is Alive and Coming Home will quite bluntly…blow you away.

Like Liberace, Randy Anderson is a home-boy residing in Marshall, Wisconsin, where Liverace’s father lived for some time. Randy’s fascination with Liberace led him to create a tribute to the performer, taking piano lesson, and designing costurmes and jewlely. Rand and Jim Foreest, his manager, have taken the Liverace impersonation on the road and played in Las Vegas on Liberace’s own piano.

Randy Anderson boldly goes beyond impersonation and reveals an acute and sensitive communion with his mentor and a superb sense of theatre. Randy’s acting and empanty towards Liberace explodes with larger than life energy as well as deep compassion and tenderness.

Each night of our performance we will pick up our Liberace and his grandmother (wrapped in her mink coat) at their Marshall home, in a limousine, and bring them to the theater where patrons will be waiting with great expectation outside the doors to shout and scream in glee. The show will begin with full audience participation once the limousine arrives.

We promise to reveal the powerful human saga of Liberace’s life that is the essence of true theatre- his orchestration of his own mythology, his love/hate relationship with his mother, his uncanny ability to celebrate life, and the taboos he broke that would profoundly alter pop culture. We turn our theatre into a fantasy world of sequins, rhinestones, candles and flashing lights. And as you leave this wondrous space, we will pass out condoms from a sequined basket!

And you, too, will fall in love with this splendid man.